So your best friend/brother/bloke from work you once had a pint with has chosen you to be his Best Man. Congratulations! You are literally the best person they know- or at least the person they think will write the least incriminating speech about them. But other than not shaving off the Groom’s eyebrows the night before the wedding, what exactly is expected of you? Here are our 7 tips on how to be a legend as a Best Man.

So the basics are

But what else is expected? The Groom may need help organising the tuxes. The Bride might be expecting a heartfelt blog post for her wedding website. Make sure you check with the happy couple what is expected from you upfront, so you can be sure you allocate enough time, and you don’t end up falling out before the cake is cut.

Thankfully, you’re not in this alone. You’re going to need ideas for the stag do, ammunition for the speech, and pictures of the Groom wearing a princess dress when he was 5, just for your own amusement.

So, find out who the Groom wants involved, and get their contact details as soon as possible. That might mean setting up a few Whatsapp groups, one for his family, another for all his friends. A few drinks out with his nearest a dearest could show you a completely different side to your best friend.

And don’t forget to check in every so often with his Mrs! Even the Groom knows she’s the real boss. 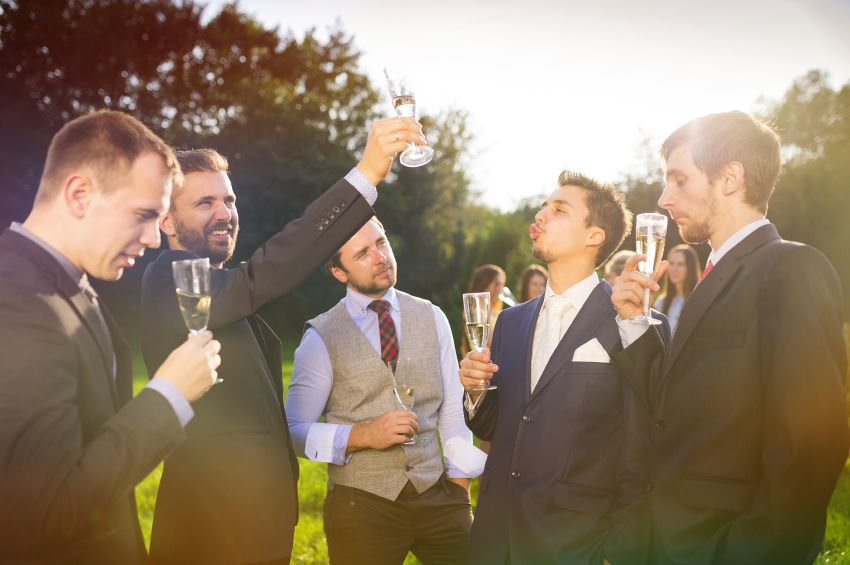 Let’s face it, this is the best bit. But it doesn’t have to be just beers and a strip club- in fact, it shouldn’t be!

Tobooka has some brilliant, fun and unusual ideas for a stag party no one will ever forget.

Your groom thinks he’s a bit of an action hero? How about taking him to practice his skills in archery. A perfect excuse for him to get out his green tights and live out his Robin Hood fantasy.

Your groom more of a nature guy? Maybe take him duck herding. Apparently, ducks are much harder to herd than sheep, but probably less challenging to herd than a bunch of overexcited Stags, so you’ll probably nail this one.

Still feeling a slight frustration over the kilt fitting, and the 25,000 emails you’ve had from the Bride “checking” you’ve started your speech? Take out some of that frustration with a game of bubble football. The most fun way to knock over your mates without causing permanent damage.

Or if you’re really just interested in drinking beer, why not try a beer tasting? A great way to get sloshed, whilst feeling like you’re being somewhat educational.  I mean, if you’re going to get a PHD in anything, it might as well be something you enjoy, right?

The stag do T-shirts? We’re not fans.

Ridiculously embarrassing outfit for the groom? We could be convinced. (Do they still do that princess outfit in his size???)

Team modern fancy dress outfits? Something suave and sophisticated, like Men in Black? That could get people’s attention.

Whatever you decide upon, remember, it’s not your stag-do, but the groom’s, and fingers crossed, he’s only ever going to have one. So go big, but go with his style, not yours. If he’s really going to find something uncomfortable, then maybe that can wait until another stag.

This is a special occasion, which calls for special drinks. And no, that doesn’t include Special Brew.

You’ve no doubt had enough lagers and jaegerbombs with one another over the years, so why not try something a bit more celebratory?

Or start the night in a bar that serves the highest quality tequila- we like Patron Silver, or George Clooney’s Casamigos. Get trashed, but do it in style.

Yes, we know you’ve seen the Groom in some- interesting – situations. But does the Bride’s Great Aunty Doris need to know about all of them? If the Bride asks for an annulment before the desert has been served, then you’ve done a bad job.

We think a good length for a speech is around 7-8 minutes. That’s about 1100-1200 words. That might seem short when you write it up, but it can seem a much longer to a crowd of people who have been drinking champagne since 11am, and are itching to get their hands on their profiteroles.

If you can think of a theme for the speech, that would be perfect. Is there something the groom is really into that could form the basis of the speech? Did he once go to a Take That concert, and you’ve never let him forget it? Maybe use the words of Mr Barlow to give the speech some structure?

Don’t mention his ex’s. Even if there is a really brilliant story involving them and a llama, which just has to be shared. Save that one for the stag do, or if you must, later on at the reception when everyone has had a few drinks.

Of course, depending on the stag do hangover and your writing ability, you may want to follow the lead of many other savvy best men and recruit the Speechy team to do the hard work for you. We’re TV comedy scriptwriters by trade and we’ve written for people such as Richard Hammond, Sharon Osbourne and David Mitchell. We know how to entertain people and we can help you deliver a speech that will be remembered for all the right reasons.

7 - LOOK AFTER YOUR MATE

It’s now your official job to make sure he stays alive until he is hitched. Then it’s his Mrs job, and you are absolved of all responsibility.

Chances are, even if he’s marrying the love of his life, there will be nerves on the big day. Take him for a drink, but make sure it’s just the one.

If you’re married, have a think about what advice you would have appreciated on your big day. If you’re not, remind him just how terrible it is being on Tinder.

Prepare your best, reassuring comedy lines a la Prince William to Harry. Maybe think about a little gift you could give him before you head to the Church. Something funny or heartfelt, to calm his nerves before the big day ahead.

This is going to be one of the most amazing, most intense, most stressful days of his life, and he’s going to have you right there by his side. And if you follow all the tips above, he’ll be glad he chose you and no one else.

Good luck! You’re going to have a ball.