Son of the Groom Speech 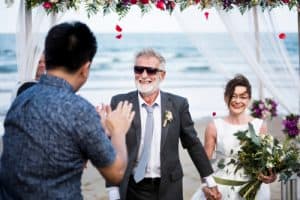 So your dad’s asked you to say a few words at his wedding – here’s your chance to pay him back for all those years of enduring his terrible dad jokes when you brought girlfriends home.

Or perhaps you’re the groom wanting to involve your younger son in your big day and wondering how exactly you can do it.

Wherever you are with your speech planning, we reckon our elite team of BBC-trained scriptwriters can help. We’re rated ‘excellent’ on Trustpilot because we’ve helped hundreds of wedding speakers create a truly memorable moment.

What Makes A Son of the groom speech special

A father-son relationship is pretty exceptional.

Over the years, you’ve probably exchanged banter, a few fallouts, and plenty of unsolicited ‘life advice’. A son of the groom speech simply requires all this to be summarised in five minutes!

Whatever the age of the son, it’s important he gives the marriage his blessing.

Whether it’s your grownup son recounting amusing tales from his childhood, your teenager reading a comically relatable poem, or your six-year-old giving his ‘unique’ relationship tips, your son’s contribution will add both love and laughter to your day. 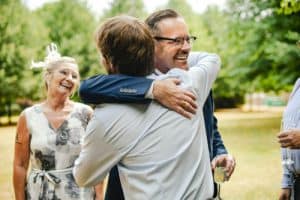 As a certified grown-up, you’re expected to deliver a speech that’s a bit more than passable. After all, you no longer have the cute factor as a distraction when you’re 30.

A son of the groom speech is an opportunity to pay a fitting tribute to your dad as he cements his new-found happiness. It’s also your chance to give him the ultimate roast.

You’re essentially taking on the role of best man, but maybe with added sentimentality owing to your unique father-son bond. Who else can share socks and shaving foam, and look exactly the same on a Snapchat Face-Swap?

If you’re overwhelmed at the thought of putting a lifetime of wine gums gifts and Star Wars cinema trips into a speech, look at how others describe fatherhood:

If you’re first on the speaker line-up, you’ll be expected to welcome the guests, but keep it brief to avoid stealing your dad’s thunder. Your job is simply to warm everyone up with some laughter and then tack on some sweet stuff about him being a good role model towards the end – you can make this bit as irreverent as you like.

It’s important to get the balance right between paying a fitting tribute to your dad and remembering to officially welcome his new wife to the family – this can be comically adjusted if they’ve already been together for years and years.

You know your dad better than most people, so you’re well placed to give the bride advice on how to successfully co-habit with him (e.g. don’t try and change TV channels when you think he’s fallen asleep – he may be snoring with his eyes closed, but he’s still ‘watching it’).

No one expects a long, bespoke speech from a little one. Something short and thoughtful will win some big smiles and more than a few ‘awws’.

It’s perfectly fine to borrow the work of others – in fact, we encourage it in moderation. We like these playful readings from children’s books. Or Harry Potter fans can recite these magical love quotes from the wizarding world.

If you want to aim for something more original, ask your son to write a few lines about what he thinks makes a good marriage. It’s always amusing and often unexpectedly poignant when kids put their perspective on grown-up topics.

A small contribution from your son will add something special to the speeches and remind him he’s an important part of your big day. 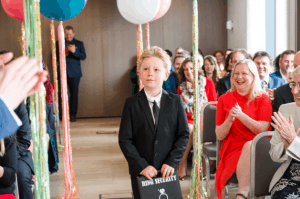 Few teenagers will agree to read anything too soppy, so aim for humour over sentiment. If they look at you like you’ve just dropped their X-Box on the floor when you ask them to write a speech, have them pick a funny wedding reading instead.

Some more outspoken children might be up for giving their hot take on matters of the heart. Our writing team once helped a 15-year-old craft a love story using Star Wars quotes for his mum’s wedding!

Always aim to keep the speech length short – it’ll be funnier and more memorable for the right reasons. You might want to get an adult to look over the speech before the day – we recommend your son rehearses it on a willing family member before delivering it to a bigger crowd.

Memorising your speech helps the delivery to sound more natural, but we fully endorse the use of cue card and prompts.

Bear in mind that public speaking isn’t for everyone. Many people freeze at the moment of delivery. If this happens to you or your son, go with the flow and keep calm – there may be an opportunity to try again later once everyone’s more relaxed.

Nothing involving kids ever goes exactly go to plan. Learning to laugh whatever happens is a pretty decent way to begin your marriage! Here at Speechy, we know a sense of humour is key for all speeches. 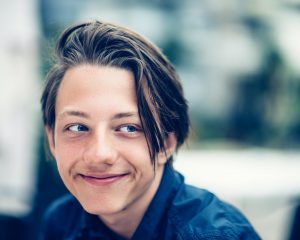 The Speechy team are TV and radio scriptwriters by trade, so we know what works and what doesn’t when it comes to entertaining audiences.

Wherever you are in the world, here are some of the ways we can help you… 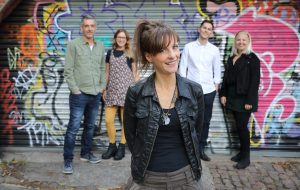